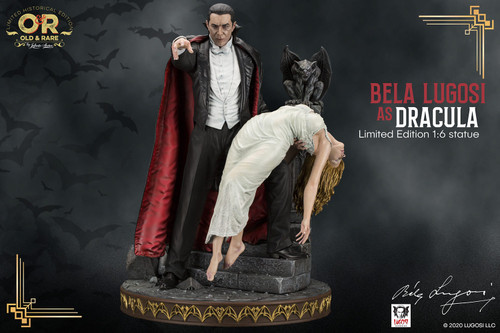 Bela Lugosi created his unique portrayal of Count Dracula on the Broadway stage in 1927, establishing the indissoluble link between the actor and his most famous role.

Born Béla Ferenc Dezső Blaskó in Lugos, Hungary in 1882, he took the name Béla Lugosi and became a success on the Hungarian stage. He made his way to America in 1920 and became a naturalized United States citizen in 1931. This same year, Bela Lugosi appeared in the title role of the Universal film Dracula directed by Tod Browning - the role that would bring him unprecedented fame. Still today the movie is considered a cinema classic. His elegant and hypnotic performance and his romantic Hungarian accent made his performance as Count Dracula unforgettable and instilled a sense of fascination with the man behind the character.

Bela Lugosi has become a timeless icon, recalling the golden years of Hollywood cinema and classic horror, a period still loved by many fans all over the world.

After careful research into every detail and dozens of original photographs provided by the Lugosi Estate, we worked at length on sculpting this statuette. It is based on inspiration from photographs from the Broadway play, publicity shots, film stills, original art, and the quest for the perfect mood and atmosphere evoked by the setting of the Dracula legend.

The vampire and his female victim embody the spirit of the Victorian age, the magic of the tale, the masterly sculptural quality of a statuette of rare elegance that also evokes profound magic and mystery. Even the tiniest details help express a world steeped in supernatural enigmas, historical epochs and legends passed down over the centuries.

This Bela Lugosi as Dracula statue reflects the essence of every vision and dream that literature, cinema, and imagination have been capable of imparting to us all.

Condition: NEW STORE STOCK, NRFB in SEALED SHIPPER
Box Grade : FACTORY NM/MINT ()
***DUE TO SIZE, THIS ITEM WILL SHIP IN ORIGINAL SHIPPER***
***LOCAL PICK-UP RECOMMENDED***
IMPORTANT NOTE: O'Smiley's is an Authorized US Dealer for Sideshow Collectibles. Stock Photos/Prototypes shown, final production fabrics, colors, and textures may vary slightly. For adult collectors ages 15 and up only.
"BREAKABLES": We will open and check item(s) for factory issues prior to shipping PER BUYERS REQUEST ONLY. If no request is made, Item is shipped SEALED and considered factory mint. If breakage occurs during transit, proper insurance claims will need filed by us, the seller.
NONE