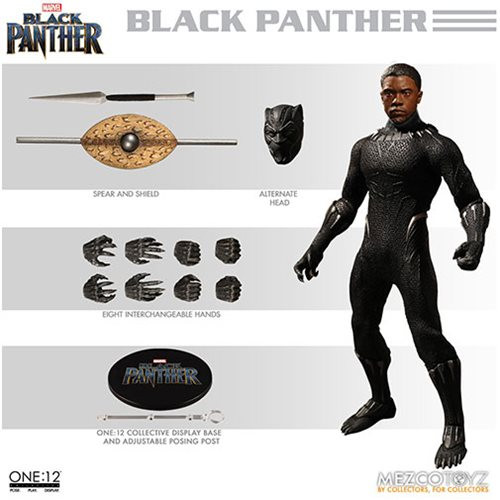 Can Black Panther save the world? Direct from the groundbreaking feature film Black Panther, Mezco welcomes the Black Panther One:12 Collective Action Figure! Intricately designed with a cloth outfit recreating that of King T'Challa's Vibranium suit, authentically detailed accessories replicating those seen in the movie, and the likeness of actor Chadwick Boseman. The figure boasts two comprehensively detailed head portraits: one masked and one unmasked, as well as a meticulously crafted shield and spear, replicating similar weapons seen in the film.

Following the events of Captain America: Civil War, King T'Challa returns home to Wakanda. When two enemies conspire to bring down the kingdom, King T'Challa must team up as the Black Panther, with Wakanda's special forces - the Dora Milaje, to prevent a world war.

1x One:12 Collective display base with logo