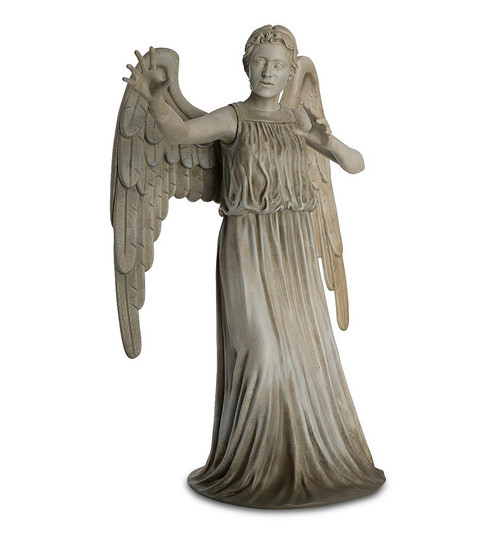 ABOUT THIS FIGURINE
Don’t blink. Don’t even blink. Blink and you’re dead! This MEGA-sized Weeping Angel comes straight from the episode “Blink” (2007) and is even more terrifying than ever!
The Weeping Angels are “quantum locked” aliens, who freeze into an indestructible, stone-like form whenever someone is watching them – almost like statues… Rather than killing their victims, the Weeping Angels drain their potential energy – sending them back to the past so that they can die of old age in the present. Also called the Lonely Assassins, the Weeping Angels debuted in the 2007 Doctor Who episode “Blink”, and have returned to plague the Doctor and his companions many times since.
This figurine is a limited edition and hand-crafted from metallic resin. This giant-size statuette comes with a choice of two faces, to represent a Weeping Angel frozen mid-pounce!
This mega figurine will make a great addition for any fan of the hit BBC TV series 'Doctor Who'!
Brand Doctor Who
Manufacturer Eaglemoss
Type Figurine
WHAT'S IN THE BOX?
The Weeping Angel Mega Figurine features:
Two (2) Swappable heads
Material: Metallic Resin
Hand-painted for incredible detail to show all the little details of the statue
Complete with a detailed 20-page magazine, read every adventure detailing the appearance and impact of the character.
ADDITIONAL DETAILS & DIMENSIONS
Materials Resin
Product Size Height: 12.4" (314.96 mm) | *
Box Size Height: 10.50" (266.7 mm) | Width: 13.50" (342.9 mm) | Depth: 20.50" (520.7 mm) | *
Weight 7.60 lbs (3.45 kg) *
SKU 907220
UPC 5059072009188
* Stock Photos are used *
Condition: NEW STORE STOCK, NRFB
Box Grade : FACTORY NM/MINT ()