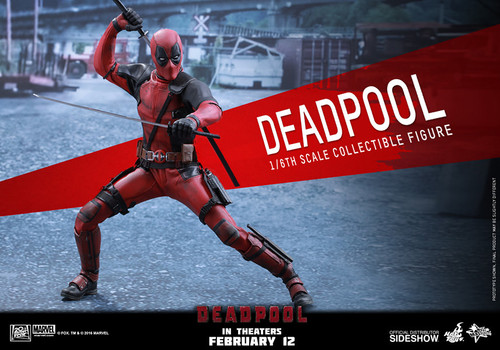 Marvel’s most unconventional superhero, Deadpool, will finally hit the silver screen in full glory with his over-the-top personality, dark twisted sense of humor, and tendency to break the fourth wall which fans have always loved!

Sideshow Collectibles and Hot Toys are very excited to officially introduce the one and only Deadpool sixth scale collectible figure based on the upcoming Deadpool movie!

In this new film, the origin story of former Special Forces operative turned mercenary Wade Wilson will be unfolded, who after being subjected to a rogue experiment that leaves him with accelerated healing powers, adopts the alter ego Deadpool. Armed with his new abilities and a dark, twisted sense of humor, Deadpool hunts down the man who nearly destroyed his life.

The movie-accurate collectible figure is specially crafted based on the image of Deadpool from the film. It features a newly developed masked head sculpt with 5 pairs of interchangeable eye pieces to create numerous combinations of Deadpool’s expressions, newly developed body, meticulously tailored Deadpool suit with weathering effects, Deadpool’s signature katanas and pistols, a variety of interchangeable hands with gestures, and a specially designed Deadpoolthemed dynamic figure stand perfect for aerial poses.