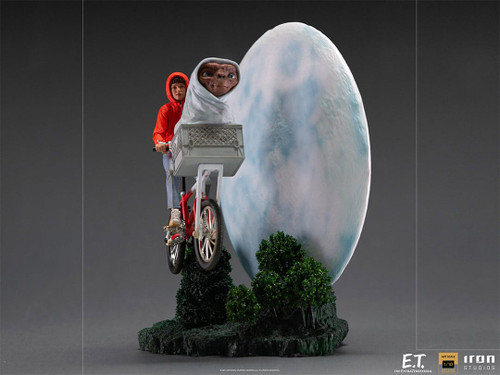 A boy carries in his bicycle basket, wrapped in a white sheet, an unusual friend, a small alien lost on Earth that is being pursued by government forces. In their flight to find their fellow men and return to his world, the two friends run towards a California forest, where the spacecraft that will rescue him must land. To escape a police blockade, the little alien uses its telekinetic abilities to levitate the bike, lifting them into the air and flying over the trees towards their destination. This anthological scene, which has the moon as a backdrop, was also used in the promotion of the film, becoming one of the best known and most striking images in cinema, even becoming the logo of Amblin Entertainment, Steven Spielberg's film producer, and now also proudly replicated with the statue "ET & Elliot - Art Scale 1:10 Deluxe - ET - Iron Studios"

Created by Steven Spielberg and written by Melissa Mathison, 1982's ET the Extra-Terrestrial is among the highest-grossing films of all time, winning four Oscars, and added to the Library of Congress's National Film Registry, being designated as culturally, historically, or aesthetically significant.

In the film, a group of botanical aliens secretly visit Earth at night to collect plant specimens. With the arrival of US government vehicles, the group leaves Earth in its spaceship, leaving one of its small members behind, who had separated from the group. The creature ends up meeting a local boy named Elliott, who then goes on to hide and protect the little lost being on Earth, creating a tender bond of friendship with a deep empathic connection between them.

This statue marks the debut of another license acquired by Iron Studios, scheduled for 2022, and this year will also be the 40th anniversary celebration of ET's premiere in theaters. The statue is already available for Pre-Order. Check out the variant version in " E.T. & Elliot - Art Scale 1:10 - E.T. - Iron Studios".

Condition: NEW STORE STOCK, NRFB in SEALED SHIPPER
Box Grade : FACTORY NR MINT/MINT
IMPORTANT NOTE: O'Smiley's is an Authorized US Dealer for Sideshow/Iron Studios. Stock Photos/Prototypes shown, final production fabrics, colors, and textures may vary slightly. For adult collectors ages 15 and up only.
"BREAKABLES": We will open and check item(s) for factory issues prior to shipping PER BUYERS REQUEST ONLY. If no request is made, Item is shipped SEALED and considered factory mint. If breakage occurs during transit, proper insurance claims will need filed by us, the seller.
NONE

BEAT THIS! AJA and SHANA Jem and the Holograms 35th Anniversary by Integrity/Fashion Royalty