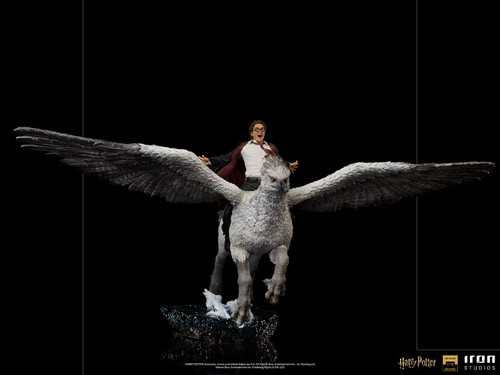 Buckbeak is a fantastic creature, known as a hippogriff, with a gray tinge. Its back, legs and paws are like those of a horse, and its head and its front are like a bird of prey. The fantastic creature even has long wings that allow it to fly. Enthusiastic and full of adrenaline, provided by his first flight riding through the skies of Hogwarts, the young wizard, Harry Potter, screams and opens his arms when his new friend, and mascot, slides his right front paw across the waters of a lake in a sweeping maneuver. This iconic scene from the movie Harry Potter and the Prisoner of Azkaban is also proudly replicated by Iron Studios in the "Harry Potter and Buckbeak Deluxe Art Scale 1/10 - Harry Potter - Iron Studios" statue.

Hagrid, the gentle Hogwarts game-keeper, introduced Buckbeak to Harry Potter in his first class of Treating Magical Creatures, and the young wizard's admiration and respect for the hippogriff earned his trust. Subsequently, Buckbeak was sentenced to death for attacking Draco Malfoy, after the boy insulted him, but Harry and Hermione Granger saved him and the animal helped escape Sirius Black, who is Harry's godfather. After Sirius' death, Buckbeak was inherited by Harry who left him again in Hagrid's care, disguised with the name of Asafugaz.

With Harry with open arms mounted on Buckbeak, with extreme care in every detail, seeking maximum fidelity both in the creature and in the figure of the protagonist played by actor Daniel Radcliffe, on a translucent base representing the lake of Hogwarts, the statue is added to the line of Harry Potter collectibles from Iron Studios, which represent remarkable moments in the films of the saga created by British writer J.K. Rowling.

Condition: NEW STORE STOCK, NRFB in SEALED SHIPPERS (SHIPPER ARE NOT MINT)
Box Grade: FACTORY EX-NM  or BETTER
IMPORTANT NOTE: O'Smiley's is an Authorized US Dealer for Sideshow Collectibles/Iron Studios. Stock Photos/Prototypes shown, final production fabrics, colors, and textures may vary slightly. For adult collectors ages 15 and up only.
"BREAKABLES": We will open and check item(s) for factory issues prior to shipping PER BUYERS REQUEST ONLY. If no request is made, Item is shipped SEALED and considered factory mint. If breakage occurs during transit, proper insurance claims will need filed by the seller via help of the buyer.
***BUYER MUST REQUEST "BREAKABLES" BE CHECKED AT TIME OF PURCHASE for Retailer Guarantee. Otherwise, Any damage found upon arrival will be considered "DAMAGED in TRANSIT " and appropriate Steps for Insurance Claims must be taken. Damage must be reported within 48 hours upon receipt***