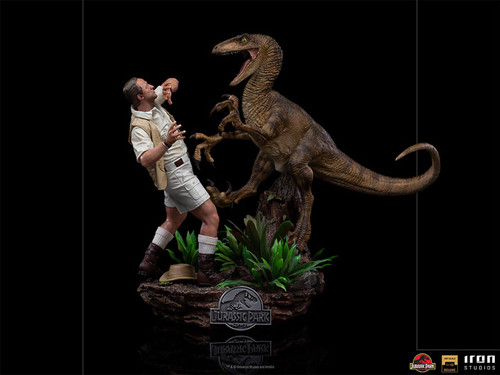 Sideshow and Iron Studios present the Clever Girl Deluxe 1:10 Art Scale Statue from Jurassic Park. Based on the likeness of the Robert Muldoon and the Velociraptor from the film, this polystone statue is hand-painted and limited edition.

Robert Muldoon is the great hunter, played by Bob Peck in the film Jurassic Park, where he is responsible for the security of the complex on Nublar Island. From the beginning, Muldoon expressed great concern regarding the Velociraptors, especially after one of his workers was killed by one of the animals during the transfer of cages. Although John Hammond finds him a little alarmist, Muldoon knows the Velociraptors better than anyone, and promptly describes to Dr. Alan Grant the intelligent and cruel behavior of these creatures.

During the incident in the assessment of the park on Nublar Island, without electricity, which caused the electric fences that contained the animals to stop working. Muldoon and Dr. Ellie Sattler rescue an injured Ian Malcolm after a T-Rex attack. Then, gathered in the control room, they decide to turn off the main switch in the energy deposit, to restart all systems, and try to regain control of the park. When Muldoon and Ellie seek to perform such a task, the hunter soon realizes that he has become the hunt, and orders Ellie to run to the warehouse while he stands to protect her. When he finds one of the raptors, determined to eliminate them all, he fixes his sights on the animal when suddenly another one emerges from the bushes beside him. Shocked and horrified, but also impressed by this element of surprise, the great hunter Muldoon's last words are "Clever girl ..." seconds before the ferocious female Velociraptor leaps on him.

One of the most impressive sequences in the film, now also beautifully represented in the "Clever Girl Deluxe Art Scale 1:10 Statue - Jurassic Park - Iron Studios", emulating the skilled hunter's fall into the clutches of the fierce predator, on a base of wild terrain with the classic franchise logo on the front.

Condition: NEW STORE STOCK, NRFB in SEALED SHIPPER
Box Grade : FACTORY NM/MINT ()
***FRAGILE ITEMS***
At buyers request, We will open and check item(s) for factory issues PRIOR TO SHIPPING once payment is made. If no request is made, Item is shipped SEALED/DOUBLE BOXED and considered factory mint. If breakage occurs during transit, you will need to contact us within 24 hours so we may ensure proper insurance claims are filed.
NONE