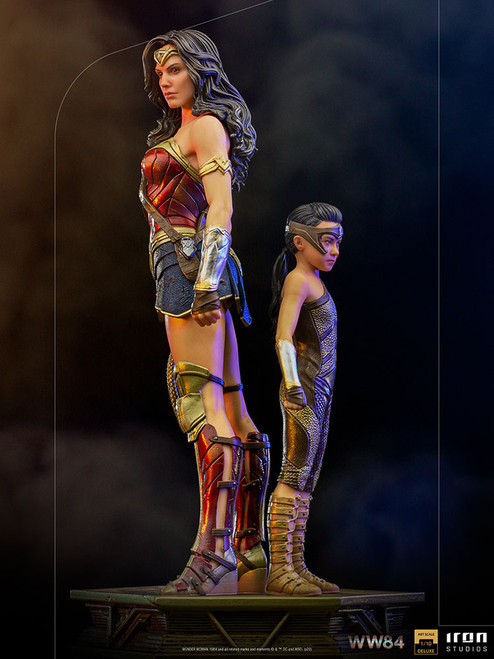 The evolution of Wonder Woman by Iron Studios

Since her childhood, the still little princess Diana has shown her adventurous and rebellious side by observing and imitating the training of her older amazon sisters, especially Lieutenant Antiope, who was later responsible for her preparation as a warrior. Despite contradicting the wishes of her mother Hippolyta, the queen of the Amazons, who preferred her beloved heiress to follow a more diplomatic path as regent, Diana’s nature made her the greatest warrior.

Arriving in the so-called “world of men” to promote and defend peace and justice, Diana came to be known as Wonder Woman, and alongside Batman and Superman formed the Justice League, meeting other heroes like Aquaman, Flash, and Cyborg to defend Earth from the invading forces of Darkseid. The immortal demigod daughter of Zeus and the Queen Hippolyta wins another version in the line of collectible statues at Iron Studios, the Wonder Woman & Young Diana Deluxe Art Scale 1:10 presents little Diana in her youthful and purest version, along with her adult version as Wonder Woman, the greatest of the amazon warriors.

Certainly the greatest superhero in comics, and among the most popular icons in pop culture; created by William Moulton Marston and Harry G. Peter in 1941; the piece presents Diana’s evolution from a little princess to Wonder Woman, just like in theaters played by Lilly Aspel as a child and Gal Gadot as an adult.